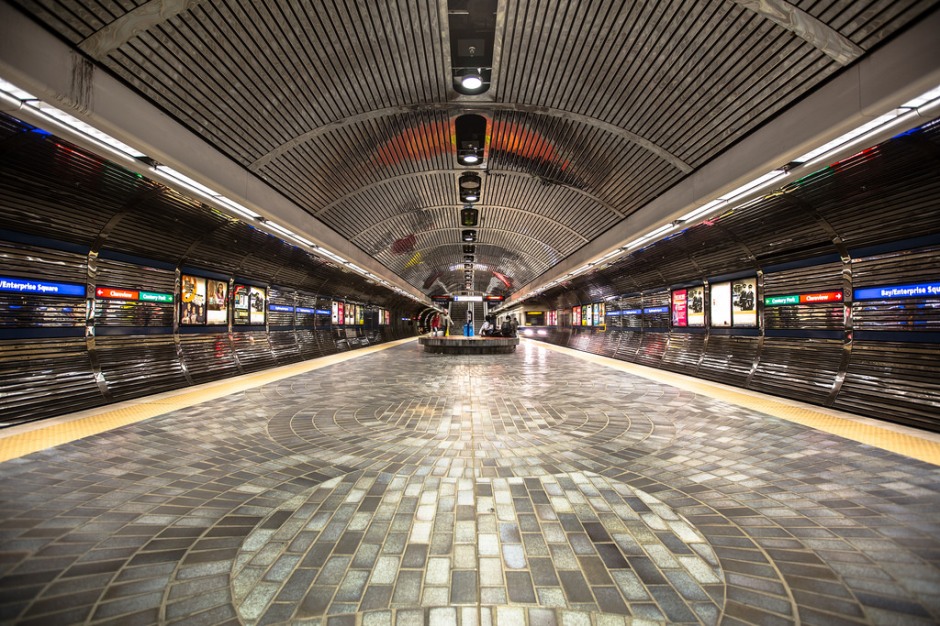 When I was 24, I worked at a research company downtown. It wasn’t the most fulfilling of jobs (still waiting for that!) but it paid the bills. Prior to taking this job, I had spent a year working at Scotia Place, a shiny, impressive-looking building that had its own LRT station. This little transit perk had made commuting a treat for my directionally-challenged self.

I had been at my new job for about a week, and as such, I didn’t yet have a feel for my coworkers. Since I wasn’t comfortable spending my lunch break with strangers, I had made a habit of going out. So far, I had spent the week’s noon hours wandering aimlessly around the city, keeping an eye on my watch.

On one particular day, I had made plans to meet my old work crew for lunch. Scotia Place was several blocks away from my new job, so I decided to take the LRT. The ride would be short (only a couple of stations) and direct. Minimal room for error.

I descended the concrete steps and made my way to the middle of the platform. There were lots of people around (though not quite as many as I’d seen during morning and afternoon rush hours). I determined which side of the platform my train would be on, and I turned to face that direction. The schedule indicated that I only had a few minutes to wait, so I didn’t bother sitting down.

A minute or two later, a man came up to me. He appeared to be in his thirties; not much taller than I was, nor much bigger. He was standing a bit too close for comfort; a fact I was just starting to register when he began speaking.

“Hello,” I responded. I wondered what he wanted.

“You have beautiful eyes,” he said.

“Where are you going?” he asked.

“I’m meeting some friends,” I said. My voice was on autopilot now; polite words and a friendly tone were the order of the day as I began freaking out internally. What does this guy want?

“Which station?” he asked.

The train rolled up, and the doors eased open. I entered and chose a seat. Unsurprisingly, my new friend sat down beside me.

We talked some more. I don’t remember what about. On the outside I was nodding and smiling and being courteous, but on the inside, I was scrambling for a way out. This guy was following me. I didn’t want him there, but I had no idea how to shake him.

Why didn’t I feel safe? We weren’t isolated; I was on a train packed full of people. I could have walked away from him. I could have loudly exclaimed that I didn’t know this man. I could have yelled for help, and someone probably would have stepped in. But I didn’t do any of that. Instead, I held up my end of a generic, pleasant-sounding conversation and silently hoped the dude would change his mind and walk away.

The LRT rolled up to my stop, and I got out. He was, of course, right behind me. I wasn’t thrilled with the prospect of leading him to my exact destination, but I had no idea how to lose him. So I headed for the food court, walking at a slightly elevated pace, desperately hoping my friends would be waiting for me there.

They were. I hugged them each hello and sat down at their table. After standing next to us awkwardly for a moment, the dude said goodbye and walked away. As soon as he was out of earshot, my friends asked me who he was.

“I don’t know,” I admitted. I relayed the whole story of how he’d followed me. My friends were creeped out on my behalf.

We ate lunch. I tried to relax, but I couldn’t stop myself from looking around to make sure he hadn’t circled back. I left earlier than planned so I could walk back to work instead of taking the LRT again. My stress level doubled as soon as my friends were out of sight.

Back at work, I shared my transit tale with my new coworkers, and they were appropriately disturbed. I did my best to shrug the whole thing off with a smile, but it wasn’t long before I was sniffing back tears at my desk.

Does this even count as a story? Did anything bad actually happen? This man never touched me. He never uttered a single rude word. Why, then, did I feel so violated?

There are lots of reasons. This guy was a stranger. He chose to ignore my fairly blatant leave-me-alone body language (headphones on, gaze averted) and insert himself into my day. He more or less held me hostage, conversationally, despite the fact that my responses were short and disinterested. He displayed a complete lack of awareness of the fact that most young women don’t like being followed by strange men.

I have no idea what would have happened if I hadn’t been meeting people that day. Would he have stayed at my side the whole lunch hour? Walked me back to work? Steered me towards a quiet corner and stopped being polite? I don’t know.

I also don’t know what would have happened if I’d behaved differently. What if I’d told him to eff off? What if I’d shoved him away? What if I’d started running in the opposite direction? Or what if I’d simply ignored him?

I made it out alive and relatively unscathed. Maybe I could have avoided the twenty or so minutes of simmering panic I experienced, but then again, maybe not. Perhaps there was no way to get out of it without escalating the situation. For every guy that walks away quietly and apologetically when rebuffed, there’s another that keeps pushing, or calls you a stuck-up bitch, or chokes you to death.

We all have a story like this. Even chubby, butchy, awkward-looking women like me can’t quite avoid them. Many of these scenarios end much worse. Many of them are in progress as we speak.

It happened over ten years ago. Since then, I’ve read plenty of articles on how to respond when approached by an uncomfortable stranger. I’ve taken self defense classes. I’ve honed my resting bitch face. On the surface, I look like a person who can take care of herself. On the inside, it’s another story. Or, I guess, the same old story.

I hate these stories.