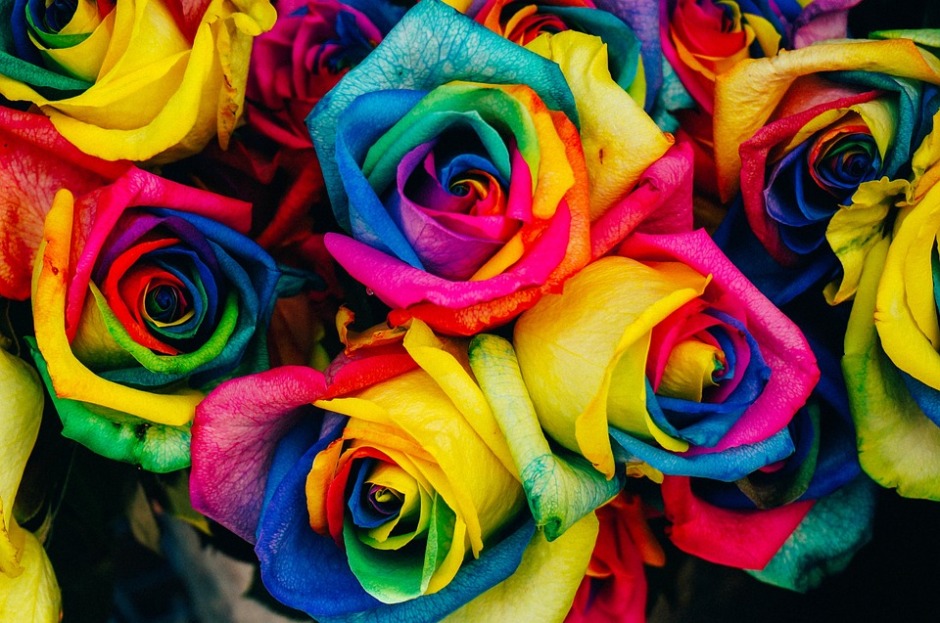 I used to work at a sign shop. I spent nearly five years there before deciding to walk away. For the bulk of that time, I worked with a woman named Barb.

I was single during my first two years with the company. I wasn’t closeted in my personal life, but my gayness hadn’t really come up at work, because why would it? I had told a person or two, but most of my coworkers weren’t aware of my orientation – not for certain, anyway. Barb was no exception.

Kate and I started dating in late 2013. Because she’s the wooing sort, she used to send little treats to me at work now and then. She was sly about it, too. The very first time she brought me something, she slipped out before I even knew she’d been there. Our new receptionist brought a cup of Tim Horton’s hot chocolate to my desk. With it, she delivered one of Kate’s business cards, with the command “Enjoy!” neatly printed on it.

“Is she still here??” I asked, my tone a mix of excitement and dismay. We had been dating for maybe a week or two, and my nervous system was still inclined to lose its shit whenever Kate was in the proximity.

“She said not to tell you she was here,” the receptionist admitted. Her knowing grin as she headed back to her own desk suggested that she was wise to the situation.

So it went from there. Chocolate-covered strawberries showed up on my birthday. Flowers showed up on Valentine’s Day. An adorable Carhartt-wearing chick would sometimes pop in with Timbits for my coworkers and a hot drink for me.

Most of the office had caught on after the first box of chocolates. Not Barb. It’s hard to say what explanation she came up with to make sense of these occurrences. Maybe she didn’t give it much thought at all.

Kate and I moved in together about six months after we started dating (because some stereotypes are absolutely accurate). She dropped me off at work each morning, and picked me up each afternoon. Once in a while, she drove over at lunch time and we ate together in the car.

At the end of a bad day, Kate would climb out of the driver’s seat immediately after rolling up and give me a big bear hug right there in the parking lot. Either Barb never saw that, or it just didn’t strike her as odd.

Months passed, and thoughtful, decidedly romantic gifts continued to show up at my desk. Barb would say things like “wow, what a nice roommate you have,” and “I wish my friends were so good to me.” I would nod in agreement, not sure what I should say.

In my experience, it’s not terribly common for a friend or a roommate to send a box of chocolate “roses” to a person’s work. Barb’s remarks implied that she felt that way, too, but she just couldn’t see any other explanation.

In the summer of 2014, I brought Kate to Nova Scotia for the first time. When we returned to Edmonton, we were engaged. I showed up at work with a beautiful diamond ring sparkling on my finger. Surely, surely, Barb would understand now.

Co-workers came to my desk throughout the day to ask how my holiday had been. Everyone noticed the ring instantly and congratulated me. I spent the morning unsure of how I was going to handle talking to Barb. She never came to my desk.

The waiting got to me, so I decided to be proactive. I walked over to Barb’s desk and showed her my ring. She took my hand to get a closer look, oohing at the one piece of jewellery on my normally naked hand. She smiled and congratulated me. Our brief conversation ended without me ever saying I was a lesbian, and without her ever admitting she hadn’t known.

In the months that followed, Barb was warm and friendly to Kate, insisting that we made a good match. She was excited to see photos of my potential wedding venues. She congratulated me after the wedding. She acted, at least on the surface, like my relationship with Kate was the most normal thing in the world.

I choose to believe that Barb’s positive response to my relationship was genuine. She was never very adept at being fake. For better or worse, she was known for speaking her mind. If she’d been repulsed by my same-sex relationship, I’m sure I would have heard about it.

The alarming part of this story – the part that people can’t quite believe when I relay it –  is how long it took her to see something that was staring her right in the face. Yes, she’s my mother’s age, and yes, she hasn’t had much experience with non-straight people in her home life. But she spent years working with customers from all over the city, in all sorts of industries. Some of them were definitely queer.

She was aware that gay people existed, but she still couldn’t see me for what I was, even with a beautiful woman courting me right before her eyes. That doesn’t make sense to me, unless she was making a deliberate decision not to think about what she was looking at.

We don’t work together anymore. I suppose I’ll never know what she was so afraid of. But I sincerely hope that the next time she engages with a queer coworker, Barb will be more willing to keep her eyes open.